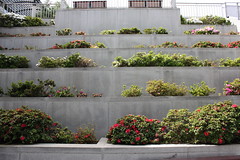 Having recently moved to Sweden but with business/friends/family in Denmark, I have experienced first-hand a phenomenon that has increasingly been discussed in various forms over the recent years: Walled Gardens.

According to Wikipedia, a walled garden refers to:

… a closed or exclusive set of information services provided for users. This is in contrast to giving consumers open access to applications and content.

This is a rather broad definition but well-suited for the purposes of this blog entry. There are several kinds of walled gardens. Some examples of walled gardens include social networking sites such as Facebook and Apple’s iTunes Store.

The walled gardens I have experienced recently are related to internet and cell-phone services between borders of countries. Here is the situation: My Danish cell-phone carrier, 3, offers the convenience of calling and surfing with the same prices in Sweden when connecting to their Swedish network. This allows me to keep in touch with friends/family and business relations in Denmark without added cost. However, there are three problems with this:

Now, the solution to all the above problems is pretty simple: Create a subscription that offers the same rate for calling both domestic and international numbers with no roaming charges. It is beyond me that I can travel freely between most of the European Union countries without border control (because of the Schengen area) but I am restrained by my Danish service provider’s walled garden when it comes to communication between borders.

I have tried different options such as buying a Skype Online Number and running Skype on my phone and I have clinged to my belief that it should only be necessary for me to carry one phone around. But I realize that I will probably soon have to carry around two phones at all times because there is also not a decent double sim-card phone out… yet.

Why are roaming prices so high? A survey by Eurobarometer from 2006 (in these days considered a very long time ago) finds that there are really no reason and suggests, among other things, to have a maximum roaming charge of 16.5 cents for receiving a call (about 1.24 DKK). Now, 5 years later, I can see that my carrier charges 1.39 DKK for receiving calls in many European countries. This is simply not good enough.

I think the above example outlines a problem that needs solving and needs it fast. Unfortunately, the cell-phone carrier business is not one I would dare entering but if someone came along and offered me 100 million as startup capital (or something like that), I would promise to devote my entire time to creating a company that would support this idea. Imagine not being restrained by borders and huge roaming charges. That would be something.