There is a good reason Notepad has survived through all iterations of Windows. It is the best tool for clearing formatting!

I call this “The Notepad Trick” and I use it all the time so I thought it would be a good idea to pay homage to good ol’ Notepad.

Here is a direct copy between two Google Docs documents:

Notice how the headline is the same size. Sometimes one might not want this. Here is the same copy with Notepad as a middle step: 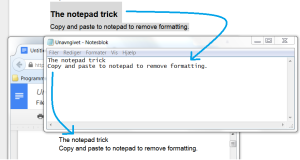 The formatting is all cleared, yay!

By the way, the trick is also described elsewhere.

I wanted to install Ubuntu on my Dell XPS 15 to try out Steam for Linux. This was not the enjoyable experience I had hoped for since a lot of things did not work perfectly out of the box. Below are some steps I had to take to get the system going.

My laptop has NVIDIA optimus technology which automatically switches between Intel’s HD 4000 graphics card and the faster NVIDIA Geforce GFX 640. Apparently, optimus support on Linux is not good.

In Ubuntu, I had no 3D support and the graphics would spontanously turn off after a restart so I was presented with only the terminal. Fortunately, there are some nice people that are maintaining a project called Bumblebee which adds support for optimus in Linux. After installing this, my graphics system has been fairly stable. Just do this:

I also recommend the primusrun package:

With the above installed, it is possible to run programs specifically with the NVIDIA card like so:

Yes, the mouse did not work. Well, the touchpad worked but my wireless Logitech M705 mouse did not. The problem, it turned out, was the Logitech Unifying Receiver. It is a small USB thing that is plugged in for a mouse and external keyboard and is used for many Logitech devices. After searching for many hours, somewhere on some forum, I found the following simple command-line trick:

You can also find it as a github gist here.

The script simply tries to reload the receiver with modprobe and it works. Sometimes after one loop, sometimes after ten. And it is a pain in the ass to run it at every startup.

Getting Steam to work

The real reason I wanted to try Ubuntu again was the recently released Steam for Linux client. After installing Bumblebee, Steam actually installed and ran quite well. However, it is worth taking a look at this guide for running programs with optirun/primusrun.

In the above, I left out the fact that before finding the solutions, I had to reinstall Ubuntu three times because of playing around with graphics drivers that broke the system until finally figuring out about the Bumblebee project. This is definitely something most users would not want to mess around with. Not only that but my mouse is still not working after a restart and sometimes I am still greated with the terminal login instead of a graphics login. It is quite random, actually.

I should also note that I have had similar experiences with Ubuntu in the past. I love Linux but it just does not work like Windows or Mac. As soon as you are faced with a weird hardware problem, good luck fixing that without the command-line!

Therefore, I have to recommend not installing Ubuntu at the current time — at least if you have dual graphics card with optimus technology or you are not willing to spend hours trying to fix things. It is a big shame because the Linux platform and Ubuntu in particular shows great promise. But it is not for everyone. It is not ready for primetime.

Here is a quick tip if you are having slow performance with Linux running on VirtualBox:

Assign at least two processors to the Linux instance

Some background… My laptop came with Windows 7. I prefer to use Linux (currently Ubuntu) when developing and I really dislike dual-booting so installing Ubuntu side-by-side with Windows is not my preferred choice, mainly for two reasons:

So instead of replacing Windows or dual-booting I use VirtualBox to create a virtual machine environment for Ubuntu to run in. I have been running Ubuntu with 4GB of ram and 2 processors for a while now and it runs incredibly fast. For example, it boots in about 4 seconds.

Recently, I wanted to try out other Linux distributions such as Fedora, Debian, Xubuntu and Linux Mint and VirtualBox is perfect for testing. I gave each of these 1GB ram and 1 processor. They were all incredibly slow, even during installation. It felt like they ran more than 10 times slower than my Ubuntu installation. After thinking about it for a while, I tried simply increasing the processor count from 1 to 2 on each Virtual machine. Voila, they all had the same fast performance as my original Ubuntu installation. They are fast… very very fast!

So why did the processor count matter so much? I do not really know how to dive in and test it but my theory is that assigning just one virtual processor in VirtualBox is like assigning just one thread of one processor, if your processor is made by Intel and has Hyper-Threading technology. As you can see below, Windows Task Manager shows 8 processors even though there are actually only 4 (I have an Intel Quad Core i7-3612QM) so Windows seem to think that I have 8 processors. I know, I know, of course Windows knows about hyper-threading but it still seems to treat each thread as an independent processor.